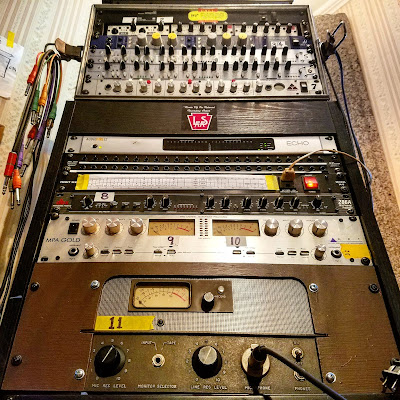 Before The Artist Comes Into The Recording Studio


I recently attended the Audio Engineering Society Convention in New York City. There was a lot of discussion back and forth about the evolving nature of the recording process, including who-does-what, and how we can keep the process smooth, focused, economical, while remaining inspiring for the artist, and everyone else concerned. I came away from that with several things on my mind.

It's Important to Define Roles.

Choosing who will play the producer role is an important decision. This is the person whose every move is made in the name of getting a compelling performance of a great song recorded. They need to find out what's great, and showcase that; a producer makes it happen, from soup to nuts. They will be there at the beginning, and even if things get messy along the way, they will see things all the way through, and be there at the end.

A producer will possibly attend shows and rehearsals, work on arrangements, check your equipment, recommend outside musicians if necessary, help decide what songs to record, schedule sessions, set the day's agenda, and even coordinate budgets, finding ways to save the artist money. They often work ten times as hard on the recording as the artist does, so that the artist's mind and spirit is freed up to actually perform the art, and get the best takes.

I've heard people compare a producer to a film director. They must know everything about the artist, and the overall artistic direction of the effort. They must be organized, have a network of creative people on call if necessary, possess great communication skills, a good personality, and should bring a great deal of music theory and technical know-how to the table.

A producer is also going to be the person who is going to tell the artist the cold hard truths, such as when someone's lack of playing ability may drag the entire song down with it because of poor timing and nonexistent finesse. If something like that isn't addressed, the game could be over.

A producer doesn't have to be an engineer, and you may see sessions where a producer and engineer work together. A producer will be calling the shots and raising the quality of the album project, and the best producers will bring out the best sound from the band and engineer(s) and capture it for the world to hear.

In short, the producer needs to realize the artist's vision, elevate that, and exceed expectations.

Remember, it is industry standard practice (and thoughtful) to include a production, engineering, and studio credit in press releases and liner notes. It helps us get more work. While we're at it, it always great to put that info out there on social media.

An engineer knows how to operate the recording equipment in the studio, get sounds and accommodate the requests of the artist or producer. Sometimes, a producer will perform this function. An engineer worth their salt should be able to make quick decisions, set up headphone mixes fast, know every microphone in the studio, and get the best possible sound in any situation.

The biggest mistake musicians make when entering the recording studio is failing to bring songs that have been carefully written, arranged, improved, and performed over time.The four most important points of pre-production are Song Selection, Keys, Tempos, Arrangements.


Play songs at shows; get feedback from anyone who will listen. If you record the song on any device you can, whether it be a laptop computer, an iPhone, heck, even a cassette recorder, you will be able to listen, step back a bit and gain a different perspective. Then make changes based on that demo. Repeat the process.

As is written in this overview at Ultimate Guitar Dot Com, you often need to “Hone It Till You Hate It”.  If you wait until you’re in the studio to think of these things, you are at a disadvantage; your recording could take longer and cost more money than you have anticipated. This is why a producer worth their salt will insist on some sort of pre-production work.

Here’s another great overview on Pre-Production from DiscMakers Pressing.

Tracking and mixing are not the same thing; at the LSRR, we never do both on the same day. Tracking is the gathering of the ingredients, while mixing is the blending of those ingredients into the dish that is ultimately served. They are two distinct processes; they require a different mindset, and different listening routines.

Don't wait until the mixing process to suggest new parts. That's why rough mixes are circulated during the tracking process, and that is why we like to have some time between tracking and mixing dates; it's good to step back and make sure all the parts are in place before mixing begins.

Often times, this "between" period is when I can hole up and do necessary "grunt work", whether that involves tidying up, organizing, comping, or merging of tracks, adding parts, or any other task that is going to set the table for a better mix. All of this helps us gain perspective and calm before the mixing job begins.

Many have also likened the making of a record to building a house. Without a good set of blueprints in order, and solid foundation in place, all we'll wind up with is a shaky house that could fall apart at any moment, and, without both producer and engineer skill sets present, we will never get the best recording we can.

Now, would you like to make your recording Fast, Cheap, Or Good?

"Everyone's gotta wear a different hat. If we all tried to do the same thing, nothing would get done, Mick!" - Joel Kerr - G & J Audio

(Also, any thanks to Eric Michael Lichter for inspiration with regards to this page.)