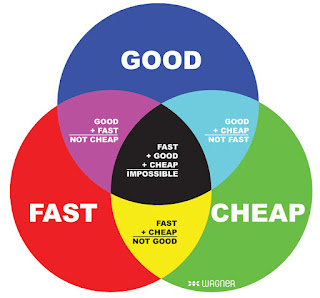 When we talk about "Music Business", remember:

Half of that term is BUSINESS, and in the recording studio, we have the same three options:

A. Record something quickly and cheaply, but it wont be good.

In one way or another, my name is going on your recording, courtesy of an engineer, producer, or co-producer credit, and I'm not letting anything leave this place that I'm not proud of.

So forget this option exists. It's out.

B. Record something quickly and of high quality, but it won't be cheap.

Bring a lot of money, and practice your asses off, because you're going to need to hire and/or rehearse all the musicians to do a lot of stuff perfectly, live, and you're going to need to lock out the studio for days and days in a row. Because it will probably take a LOT of time to get the live sound right before recording takes place, and a lot of takes to get the magic take.

(The Beatles took at least 99 takes to get the keeper performance for George Harrison's "Not Guilty" which wound up getting left off The White Album anyway! How could they do this? Well, they were arguably the biggest rock/pop stars, ever, and there was no shortage of EMI money for them to play with - plus, they had the best studio staff of their day.)

C. Record something of high quality and low cost, but it won't get done quickly.

I remember the first time I ever went into a real recording studio. We had already done two full length cassette-only releases ourselves (that got great reviews, I should add), and our band was rehearsing two to three times a week, and we had tons and tons of shows under our belts. All that time can be considered as recording preparation. We also had everything planned out; arrangements, keys, solos, vocal parts, drum patterns, tempos, everything.

Top notch jazz artists of all stripes go into the studio and perform EVERYTHING live, as an ensemble, no overdubs, but they have spent their LIVES getting their chops down and living the music, and practicing, rehearsing, playing gigs, etc.

So, even though we might make incredible use of our time in the studio, and got great takes, fast… it does indeed "take a long time", because when we factor in all that preparation time, there is NO SUCH THING as "quickly".

So we arrive at this:

Hmmm… what would we call someone filling a role in which they help you, the artist, achieve all three of those goals? Glad you asked - it's called a...


Sometimes that's one producer. Sometimes it's two people co-producing. Sometimes, one of those people is the artist. Point being, you want someone on the production team who is NOT the artist.

Here at the Lantern Sound Recording Rig, I've seen several artists have a go at wearing the "self-producer" hat. They often miss some important things that affect the quality of the recording.

As "guy-with-notable-experience" Eric Ambel says, it's like performing dentistry on yourself. The self-produced artist has a lack of perspective by definition, and let's face it, great self-producers such as Stevie Wonder, Todd Rundgren, and Prince are few and far between.

Producing yourself is essentially trying to do EVERYTHING all at once. One giant, classic role of a producer is to free up the artist to BE THE ARTIST, and concentrate on the performance, the actual playing and singing, which is hard enough, often enough, to do alone, even!

I've been doing this for decades and decades, and I have enough experience to see a problem coming from a mile away. It could be a malfunctioning/shitty-sounding piece of gear that someone insists on using, a melody that hasn't been written yet, an arrangement challenge that has yet to be addressed, a sick/ill or drugged up/drunk musician, scheduling problems that were known but not solved, the drummer has worn out crappy heads on his drums, or someone insists on recording a part that simply is not going to work that day, or at all. If only a bass part and drum part for a song has been recorded, and the bass part is all wrong, why is the singer insisting that they cut the vocal at that point?

All this stuff has to be headed off before it costs time, money, and endangers excellence.

Here's a list of recording studio roles and some helpful definitions of those roles.